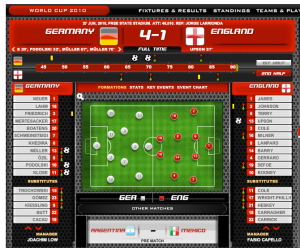 Oh man, England failed so hard it was like Mission Impossible only Tom Cruise wasn’t there to save the day. They clustered when they need to space out, and spaced out when they needed to be tight and united. It was like seeing an elastic band stretch and teeter until it finally snaps.

A very exciting game though overall, despite depressing. I’m not even a hardcore football fan anymore, I have no right to blog about it, but watching the World Cup has stirred the sleeping beast which is my past obsession with football. Back in the day (I’m not old but I like saying that) I was the only girl on the football team, and got man of the match from an excellent sliding tackle, which the boys weren’t happy about. They also weren’t happy about me beating them at chin ups on the famous tree branch outside the school, or arm wrestles. This was immensely strange because I was always tiny and skinny and not butch at all. I would talk about how I also won the furthest spitting competition, but that was when I was six years old so that doesn’t count.

This is all I had to say during the game:

Ruth Von Noakes: Ugh that fucking goal, if a tree falls in a forest and no one sees it the tree still bloody fell innit, on this level of reality anyway, and shut up string theory

Oh and also I was imagining how potentially more nerve-wracking football would be if the players were invisible. You’d just see the ball getting knocked around be like “oh my golly gosh who has the ball?” and wouldn’t really know until it went in a certain goal.

Elvis has left the building. Oh wait no I mean England.